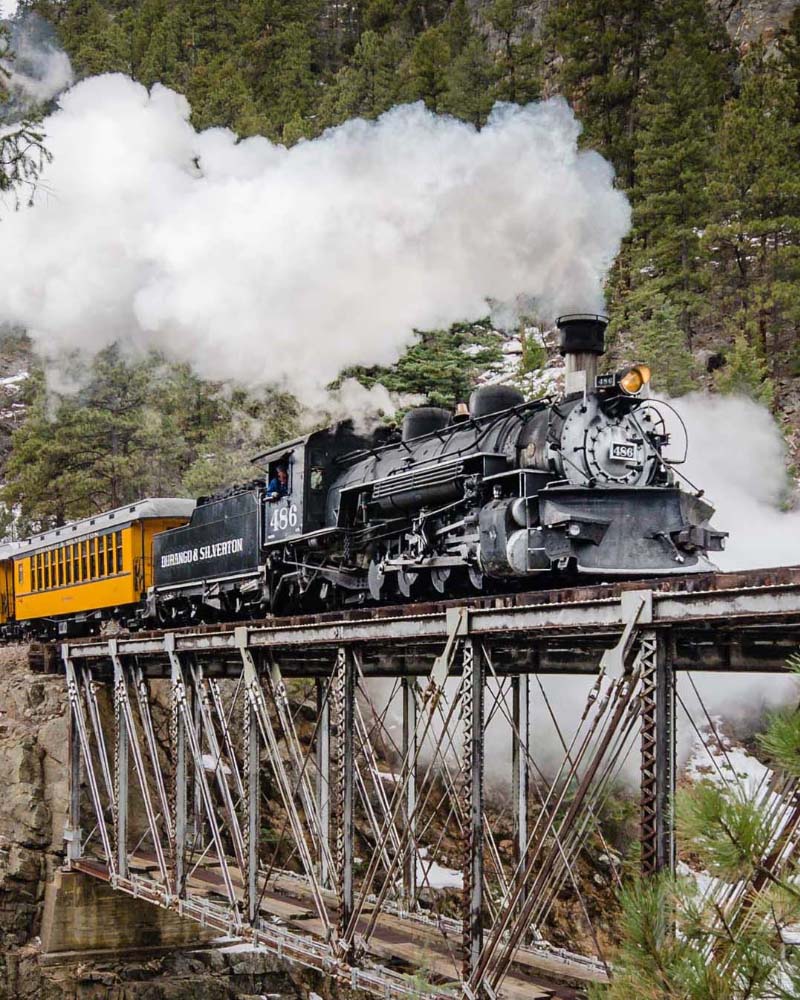 The clang of a bell and a chuff, chuff sound announces the arrival of the steam locomotive as it rolls into the station. The locomotive is scheduled to pull the next load of passengers on a scenic route that winds through the mountains and crosses over swift flowing rivers. The passengers, waiting with anticipation to embark on a journey that is reminiscent of a bygone era, step a little closer to the tracks to get a better look at this historical relic that has vividly captured their imagination.

I know that feeling. Many years ago my husband and I were among those standing on the platform of the Durango Silverton Narrow Gauge Railroad station, waiting with the same anticipation. The roundtrip journey we took was a memorable experience; from the fresh, early morning start in Durango to the stop in Silverton for a delicious lunch to the sooty, late afternoon finish back in Durango. I'd take that steam-powered scenic route again in a heartbeat.

While surfing on YouTube some time ago, I came across a video of a Durango Silverton train excursion. The videographer doesn't narrate the video but instead simply captures the sights and sounds as the train leaves the station and heads off down the tracks. The video was taken in the early spring, when the branches of the trees were still stripped bare of leaves and there were patches of snow on the mountains. Some might not consider taking the train at that time of year, but I would. There isn't likely to be as many people on it as there would be when tourist season is in full swing and less people means a more intimate experience, in my opinion. Another interesting aspect to the video is when the locomotive suffers a malfunction (mid-video) and comes to a stop. The videographer gives an up-close look of the locomotive, capturing the sounds it makes while idling on the tracks.

This video is one I never tire of watching. I'll extend it to full-screen on my desktop monitor, put the headphones on, and it's as if I am right there, being the one taking that train ride.

Marilou! What wonderful memories this has brought back to me. Remember when you went to Durango we kept Jonathan and Moriah. That is if it’s the same time you’re talking about.😊

Hi Diane! Yes, it is the same time I am talking about. I would love to take the train ride again, this time with the kids. It would be an experience they would remember. It would be so much fun if you all were along, too! What a way to catch up with each other, while riding the rails throughout the beautiful Colorado Rocky Mountains! ❤